Bodyguard: Salman continues with his string of success

Following the success of ‘Wanted’ and ‘Dabbang’, Salman has continued his tradition with box office hits.

His latest release ‘Bodyguard’ has already reported a collection of Rs 32 crore on the box office in the first two days, and is well poised to meet the film-makers’ target of Rs 100 crore.

The movie already has film reviewers describe Salman Khan as the Rajnikanth of Bollywood, while the traditional Bollywood fans are comparing the bachlor heart-throb with Amitabh Bachchan’s magic of the 1970s.

Produced by Salman Khan’s brother-in-law, Atul Agnihotri, the movie is a remake of a South Indian film about Â a love story of a bodyguard (Salman Khan) and his subject, Divya (Kareena Kapoor). With the backdrop of some unreal action sequences, the love story quietly develops with some soothing numbers by music director Himesh Reshmiya. Particularly haunting number and theme song, Teri Meri Prem Kahaani, is immortalised by Shreya Ghoshal and Rahat Fateh Ali Khan. The song stays with you long after the movie is over. 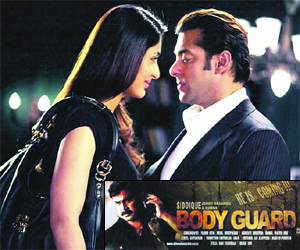 While the first half is slow, and the better of second half is spent wondering where the story was going, the last half hour of the movie makes up for the slow progress of the story line. Story and screenplay writer more than makes up for lacklustre first half with a strong change of events towards the end. In fact, the end is so dramatic that it feels as if the story-teller ran out of time, and hurriedly told you the climax.

Salman Khan’s performance is outstanding, and Kareena has ably supported him. While Kareena has left no stone unturned displaying her acting skills, the story line and performance has ensured that it is a Salman Khan movie.

This movie well sets the tone for Salman Khan’s second innings and puts him in the contender’s position for Bollywood’s “box office” Â star.