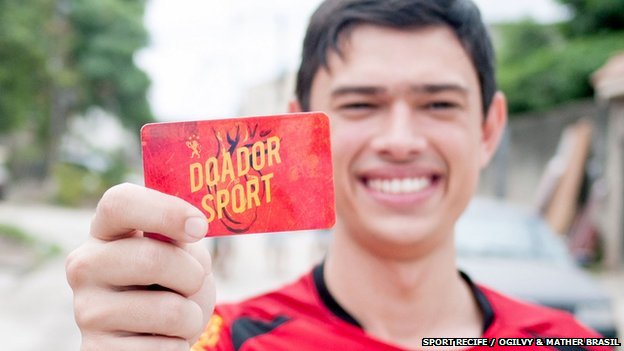 While Brazil gets ready to host the biggest sporting event in the world – FIFA 2014, one the country’s biggest football clubs is in news for a different reason.

Sport Club Recife, one of the top teams in the north-east of Brazil, has channelized Brazilians’ love for football to a cause that’s of high relevance in the country.

The club asked its fans to become “immortal fans” by donating their organs upon their death.

They conveyed the message through a video that was shown to the fans at every match at the club’s Ilha do Retiro stadium.

The video shows an organ recipient say: “I promise that your eyes will keep on watching Sport Club Recife.”

Within two years, the club managed to sign up 66,000 fans as organ donors.

The waiting list for organ donors has been reduced to zero in Recife, and the neighboring regions have also benefited positively from the initiative.

But it is not just sufficient to get fans to sign up as organ donors. It is important to get them to let their relatives know. As per local laws in Brazil, it is the family members that can decide about organ donation after the person’s death.

Efforts are being made to ensure that donors are creating awareness among family members.

The success of the scheme has attracted other clubs around the world, including Paris Saint-Germain and Barcelona, to replicate the scheme.

Seven things to do at Jaipur LitFest

Action sought against agents for luring Punjabis to US