Indians too busy to care, not any more

“Have you ever stopped by a tea stall to save a kid from child labour? Probably you were getting late for work and ignored it.

These questions are being asked by BlogAdda and Tata Tea ‘Jaago Re’ joint campaign to cure and prevent people from Too Busy To Care syndrome.

As part of the  Too Busy To Care campaign, Indian bloggers will volunteer and act for coming out of the To Busy To Care syndrome.

The campaign aims at awakening more people to start caring about the things around them. Indian bloggers will now use this platform to share stories and collectively voice their opinions to connect, volunteer and act for coming out of the Too Busy To Care (TBTC) syndrome. 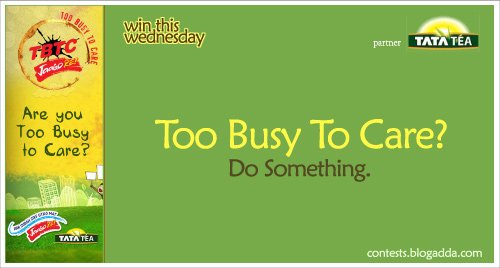 Did you get out of your car to help someone in a road accident; or assist an old man cross the road? Maybe you had to reach home to watch your favorite TV serial or cricket match.

Perhaps you never bothered when a beggar was dying of undernourishment.

“I feel the message that the campaign is trying to give out is very important as it is often overlooked by people in their day-to-day lives,” says Nirav Sanghavi, founder BlogAdda.

“We need to take time out from our busy schedules to help someone and do something for the society. I support this campaign and would appeal to all bloggers and people to join hands to do ‘that something’ and act!”

“Our latest campaign is to encourage people to rid themselves of the TBTC syndrome – Too Busy To Care syndrome – and go out and do something for the cause they feel passionate about,” says Sushant Dash, VP Marketing at Tata Global Beverages.

“We seek the opinions of bloggers who, with their reach and individual expressions would help spread the word as well as aid the eradication of the TBTC syndrome. The TBTC Blogger Contest on BlogAdda, we hope will help us achieve the same.”

Bloggers will share their stories at BlogAdda and will be able to act on something which they wanted to, with the help of Jaago Re! More details are available at BlogAdda.

One of the reasons many Indians settle overseas is often because of the citizens’ lack of civic responsibility.

FIND OUT HOW YOU CAN HELP

No word about Indians affected in earthquake

While there have been unconfirmed reports of eight Indians having died in the Christchurch earthquake, there is no official confirmation yet.

The New Zealand police are likely to release the list of people affected by the Christchurch earthquake today.

According to a report by a local Indian radio station in New Zealand, as many as eight people of Indian origin (or Fijian Indian origin) have died, following Tuesday’s earthquake in Christchurch.

According to Apna 990 Radio’s Mohammed Shaiyaz, a doctor from Wellington has given the radio station the confirmation about the Fijians taken to Wellington Hospital.

The radio station reported that 14 Fijians have been admitted to the Wellington Hospital. The Global Indian magazine has not received any confirmation from the authorities.

Fiji’s Foreign Affairs Ministry revealed that they are still in talks with their mission in Wellington to verify the reports, according to Fiji Village.

Permanent Secretary, Solo Mara told the Fiji Village that they have not received any notification from the Mission as yet.

In the meantime, Christchurch Police are urging people who are leaving the city to advise friends, family or neighbours that they have left and that there is no concern for their safety.

Superintendent Dave Cliff, Canterbury Police District Commander, said people may be ringing the missing persons lines, reporting people as missing when they are not. This diverts resources from the complex and time-consuming task of the search for missing people.

“If anyone previously reported as missing is found or makes contact with friends or family, Police ask that we are advised through the missing person lines.”

The phone lines to call to report people missing – and to say that they are found – are:

As the political crisis worsens in Libya, the fate of over 18,000 Indians stranded there still hang in limbo.

The family members of Indians in Libya are worried for their safe return.  While the Indian government said it trying its best for possible evacuation of the stranded Indians in Libya, the task appears to be very complicated. The telephone lines are not functional in most parts of Libya.

The stranded Indians are desperately trying to seek help.

“The situation is very tense here and very scary,” NDTV, an Indian television quoted one Ajay Gupta, an engineer from Tripoli, who commented through the web.

“We are inside our camp but we’re running out of food and money.

“Outside there is a very tense situation with lots going on. There were protests and when we went out yesterday, we saw very heavily guarded people, in civilian dresses.

“They’re roaming the roads with ammunition… We just want help from the Government of India so that we can be evacuated as soon as possible,” the television channel reported.

Ajay’s wife and two daughters live in India’s northern state of Bhopal. “My younger daughter doesn’t understand much, but my elder daughter was very worried. She cried a lot and her exams are going on…we are looking forward for him to come back by any means and be with us again,” NDTV quoted Ajay’s wife.

Call for prayers for Christchurch victims

Hindu statesman Rajan Zed, in a statement in Nevada (USA) today, called for prayers for the victims of Christchurch earthquake.

Christchurch Cathedral in ruins after the earthquake

Zed, who is President of Universal Society of Hinduism, said that his heart and thoughts go to the victims’ families, injured, rescuers and relief workers. “May God grant them strength, courage, comfort, and assistance.”

Zed further said that he was full of sorrow for those who lost their lives in this calamity and urged other world religious leaders to join him in prayer for them.

He appealed to the New Zealand Hindu community to wholeheartedly support the relief efforts and mobilize help for the affected.

Indians – Come To Your Census

There are 354,552 Asian people in New Zealand (2006), of which 104,583 are of Indian origin. This growing community needs government resources to be allocated. And for this reason, it is important that they are counted in the upcoming 2011 census.

Census information helps determine how billions of dollars of government funding is spent in the community.

The 2011 Census is in full swing, with the delivery of close to eight million census forms and Internet Access Codes to nearly two million households around New Zealand. New Zealand population is 4.2 million.

In the lead-up to census day (8 March), 7000 census collectors – the largest temporary workforce in the country, will be tasked with this mammoth job.

Carol Slappendel says the 2011 Census will be the biggest census undertaken in New Zealand yet, and people can opt for the secure, quick and easy option of filling in their forms online.

To encourage participation, the Dunedin Public Libraries have joined forces with the ‘Computers in Homes’ digital literacy programme to provide community Census sites, where people can complete their 2011 Census online.

However, Statistics New Zealand have a problem on hand. Overstayers are not keen to participate in the census, according a ONE News report.

“If I get caught by the immigration or police I’ll be deported back to the islands,” one overstayer told the television news programme. There are reportedly 15,000 overstayers in New Zealand and many of them are too afraid to put their address on anything, including the census form, as per the news report.

Close of the heals of New Zealand census which is conducted every five years, India is getting ready to count its 1.2 billion people in one of the world’s largest census exercises.  India conducts its census once in 10 years, and its 2011 census is being described as the largest peace-time mobilisation in the world.

The Indian census will employ 2.7 million staff to cover 7,742 towns and 600,000 villages.  In addition to being the most expensive census exercise in the country’s 64-year history, there’s one more ‘first’ for the country driven by caste politics. The Indian census commission will, for the first time, ask for respondents’ caste.

NRIs can vote in India

A longstanding demand of overseas Indians, popularly known as Non-resident Indians (NRIs), to be able to vote in Indian elections has been met by the Government of India.

An estimated 11 million Indians living outside India can participate in India’s democratic election process as long as they have registered themselves as voters. They also have to be physically present in India on the polling day to be able to vote.

This implies that Indians living abroad cannot vote by post, unlike some western countries that allow postal balloting for its overseas citizens.

“Every citizen of India staying in a foreign country, who has not acquired citizenship of a foreign country, and has completed 18 years of age as on January 1 of the year, can make an application for being registered in the roll for the constituency pertaining to the locality in which his place of residence in India as mentioned in the passport is located,” says a government statement supported by the country’s Election Commission.

India is the world’s largest democracy, with a population of 1.2 billion.